As keen garden and landscape enthusiasts, Grass Tiger are active followers of the Royal Horticultural Society (RHS). There are many exciting projects currently underway and we’re thrilled to be able to share them with you.

Let’s look at what we can expect to be developed during the coming years.

There is big news in the world of the RHS; the flagship garden, is undergoing an exciting period of transformation. Landscape garden designer Christopher Bradley-Hole was commissioned to oversee the project, which is scheduled to finish by the end of 2019.

Wisley was first developed as a demonstration garden by the RHS, this has resulted in its layouts being a bit disconnected from one-another. The new design will hopefully address this issue to create a more naturally flowing experience.

There are three fundamental changes happening: a new Welcome building, the opening up of parts of the Laboratory building and a new National Centre for Horticultural Science and Learning. This ground-breaking centre for science and learning will inspire the next generation of horticulturists and open up our previously unseen scientific work to our members, visitors, and the wider public.

As part of the RHS £160 million investment programme, we can expect some exciting developments, and we look forward to seeing more from this particular garden design in Wisley, Surrey. 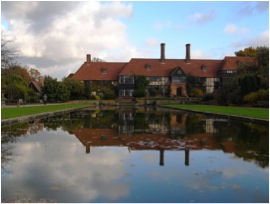 The above shows the laboratory building at the RHS Wisley gardens

Here we will witness the creation of an entirely new garden at the heart of the Northwest, in Salford, Manchester. The RHS have budgeted £30 million towards the garden and landscape design; Tom Stuart-Smith will oversee the operation.

The project is aiming to create a beautiful fifth garden and it is planned to cover 156 acres of land in an attempt to revive the historic grounds of Worsley New Hall, where the remains of a mid-Victorian estate was built in 1840.

The plans are to recreate the walled garden as the centrepiece of the RHS garden. Also being repurposed are the traditional lines of Victorian kitchen gardens, whilst keeping in-line with the RHS approach to emphasise growing at home techniques.

Many buildings will need to be constructed too, such as; a library, arboretum, learning centres as well as a school of horticulture and various other garden amenities.

There are visions to one day create a giant, commemorative glasshouse on the footprint of the Worsley Victorian estate, but this isn’t part of Tom’s plans just yet.

This garden design service is aiming to be completed by the spring of 2019.

It’s been joked amongst RHS employees that this garden has only been named “RHS Bridgewater” to avoid the confusion of potentially running both “RHS Wisley” and “RHS Worsley” gardens.

No Garden in the Midlands

Sue Biggs, RHS Director-General, admits that they were looking for a suitable location in Birmingham, but in the end, they settled on the Bridgewater location.

The location of this garden was a surprise to many, as there is already a RHS garden fairly local to the area. RHS Harlow Carr had served the North well thus far, from its location in Harrogate, North Yorkshire.

The addition of RHS Garden Bridgewater, in the Northwest, means that there will soon be RHS Gardens accessible in every corner of the Country, however the Midlands will remain separated from all the RHS gardens in the Country.

If plans are completed in accordance to their schedule, then there should be a total of five RHS gardens open by 2019 in the following locations:

If plans are completed in accordance with their schedule, there should be a total of five RHS gardens open by 2019 in the following locations: